The original recipe reads, "In a 9x13 pan, cut 3 chicken breasts in half, add 2 cans green beans on one side and cut up red skin potatoes on the other. Sprinkle a packet of zesty Italian dressing mix over the top. Drizzle a stick of melted butter over it. Cover it with aluminum foil and bake at 350 for 1 hour.".

I cut the chicken into slightly smaller pieces. My mother likes to use a cup of liquid Italian dressing instead of zesty Italian Seasoning Mix and the stick of melted butter, so I tried that. I also added some Beer Can Seasoning.

I probably went overboard on the potatoes. I also cooked crescent rolls at the same time.

This is a winner. The food was fully cooked. Because my chicken wasn't fully thawed before I started cooking, I cooked it an extra 15 minutes. The end result was mostly moist but just a touch dry. I only ate 40% of it, but it was very satisfying.

However, I think that the liquid Italian dressing gave it a slightly sour taste, probably because of the vinegar in the dressing. It is not very noticeable, but next time I might stick to the original recipe that calls for seasoning mix and butter. 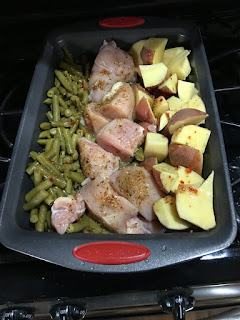 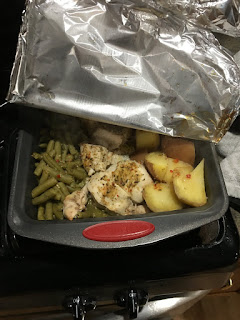